My brothers and I have been discussing a family climb of South Sister for about a year. In late July, we finally agreed on a weekend and made formal plans to ascend the 3rd highest peak in Oregon! Fortunately for us, the Rooster Rock fire that burned 6,000+ acres in the Deschutes National Forest was contained and didn’t threaten our trip!  Our climbing quartet included me (ploss), my two older brothers (Mr. Picky and Chef), and nephew, Grunt.

South Sister is the youngest, yet highest, of the Three Sisters @ 10,363 feet. It is a glaciated peak, adorned with the Lewis and Clark glaciers and Oregon’s highest lake, Teardrop Pool. The hike from the South Ridge is both easy to access and non-technical, providing an opportunity for any fit and/or patient person to reach its summit during Summer months. There’s also an option to set up base camp at Moraine Lake, allowing for acclimatization, less gear for the summit bid and an early start.

In my case, I wanted to go as light as possible and made my gear selections accordingly. I would need to boil water for 4 people and provide shelter for 2.  I would leverage my experience in climbing Mt. Adams and Mt. St. Helens to establish my gear for this ascent.

To climb South Sister, you can depart either from Devils Lake or Green Lakes trailhead. We chose Devils Lake, which is about 25 miles outside of Bend on Cascade Lakes Hwy/SW Century Dr. The trailhead has bathrooms and ample parking if you include the lot and the roadside.  At 5,450 feet, Devils Lake is 6.25 miles from the summit.

We left at high-noon on Friday and proceeded non-stop to the trailhead, arriving in just over 4 hours. The trailhead was abuzz and full of cars, even on a Friday afternoon, as climbers were returning from their summit bids. 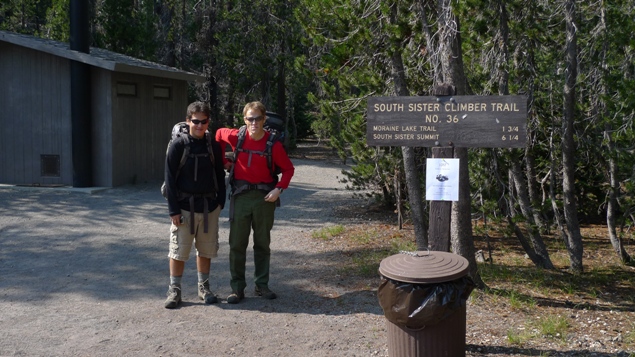 Grunt and Chef at the trailhead

We departed the trailhead at 4:09pm. The first portion of the climb travels through the trees and steadily climbs to an altitude of 6,700 feet at the cut-off to Moraine Lake. There are several points along the first mile of the trail where one can fill up on water. I decided to pass at this point, as I was carrying 4 liters of water, although I soon found that the water in my Nalgene canteen was foul from soap residue. The contents were pitched the contents in a nearby bush, reducing my weight by 2 lbs.

We traveled 2.5 miles, arriving at Moraine Lake at 5:25. I maintained lead position, followed by Grunt, Chef, and Mr. Picky. The detour would add about 2 miles to our trip, but was well worth it with sunny, although chilly weather from a strong breeze. The lake is surrounded on the nearby ridge by many campsites, most of which were occupied. We camped above the lake in a spot with a great view of South Sister and Broken Top from a slight walk up a hill. Given the layout of the trail/campsites, you had to walk through one campsite to get to the next, which made it a non-private affair. This included a motley crew; someone had used a tree next to our site for a bear hang which was over-the-top for an area with 20+ groups nearby.

Broken Top from above our campsite

We erected our tents at this time in, again, very windy weather. The Fly Creek UL2 tent was extremely easy to pitch and I used all eleven stakes to secure it. Even with the footprint, the entire setup weighed a mere 2.95 lbs. The only challenge is that, for two people, it’s a tight fit (more on that later). I would share the tent with Mr. Picky. Grunt would share the tent with his father, Chef.

We made a water run to the lake and filled our water bottles. Chef made short work of the lake water with his filter. I would rely on newer technology, my SteriPen. I filled my canteen with the tepid, but clear lake water and loaded the used lithium batteries from a prior trip. I was greeted with 4 blinking red lights indicating a battery failure. FAIL. Fortunately for me, I would not need more water than what I had in my reservoir, although I did have backup chemical treatment just in case.

I started up my Packafeather XL stove with 2 ounces of fuel, tightly wrapped it in a windscreen and added my titanium pot with 32 ounces of water. Opening up the air intake to full, this thing put out a ton of heat. I conserved fuel by closing the air intake after several minutes at full power. This left about a half ounce of fuel after the stove was snuffed and I was able to add it back to my fuel supply. Versus the White Box Stove, the PackaFeather is lighter, more efficient, and allows for excess fuel to be saved.

We dined on some Mountain House Spaghetti with Meat Sauce. Although not gourmet, it satisfied the needs of the crew, which included one very picky-ass Mr. Picky.  We had some dried Philippines mango for desert.  Due to the wind, everyone bundled up. I wore all of my clothes with the exception of my Mitts and PossumDown socks.

Grunt hit the rack first around 7:30pm and the rest of us followed suit by 9pm. It was really strange but the wind stopped immediately after we got into bed, making my sleep system perfect for this day in August. I was able to utilize my vest as a pillow and was comfortable.

In retrospect, going to sleep prior to Mr. Picky was a bad call. When he had completed his nightly metro-ritual, he came into the tent, flailing his elbows and knees at me in the process. At 2:30am, a group of probably 8 hikers traversed our campsite, abrubtly awakening us with loud voices and bright headlamps. For the rest of the night, I “enjoyed” the “spooning” and occasional sparring from my brother. At best, I had a restless sleep.

We got out of our tents at 5:30am and each of us, excluding Mr. Picky, enjoyed a pie. I packed up everything into my pack, excluding the tent, and threw it on my back. My total weight for the ascent would be ~12 lbs, a manageable load. We hit the trail at 6:15am and headed up the ridge surrounding the lake to re-join the Climber Trail.

I hit the water hard as I was somewhat dehydrated from the night before. Once we climbed out from the lake basin, the trail became very wide as it crossed the plateau, gradually descending until it started its steep ascent to the summit. The volcanic rock on the trail was a mix of sand and coarse pumice. Over the course of the climb, the scree ate through the understrap on one of my gaiters. The pitch was steep and, at times, precarious, due to the nature of the trail, with scree strewn over the rock substrate and we had to choose our steps carefully. 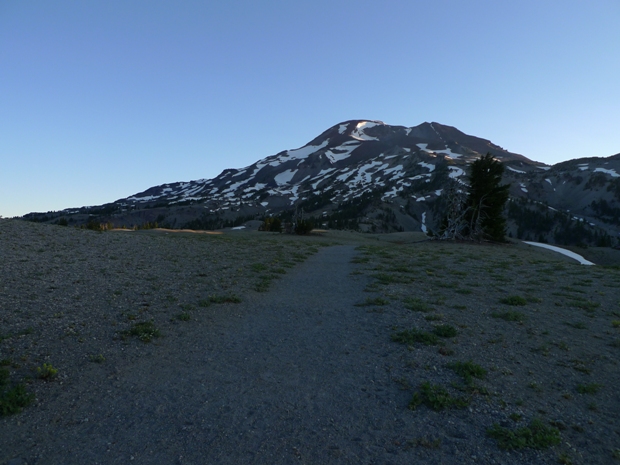 Long road to the summit

In addition to scree, there were large sections of snow. Given the time of morning, the snow was firm making for an easy traverse. At around 7:30am, we left the tree line and followed a greuling path beyond the tree line and up a relentless ridge leading to the summit. The depth of the pumice would increase as we approached the summit and the trail became very exposed as we reached the moraine that follows the Lewis glacier.

At 8:04am, we hit the lake that forms at the base of the Lewis glacier (~8,850 feet). It was a beautiful green-blue color with trails leading to it in the snow worn from people enjoying this summer swimming hole. 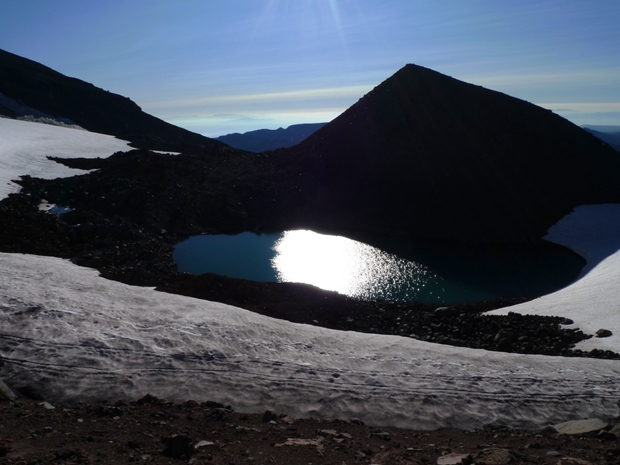 Small lake at the base of Lewis Glacier

The last ~1,500 feet were a climb straight up the ridge and it took until around 9am to reach the stone shelter at the crater’s lip. Unfortunately for me, I asked a climber gasping for air at the shelter for directions to the true summit and he told me that it was to the left. I reached the left-most shelter at 9:10am, less than 3 hours from Moraine Lake. 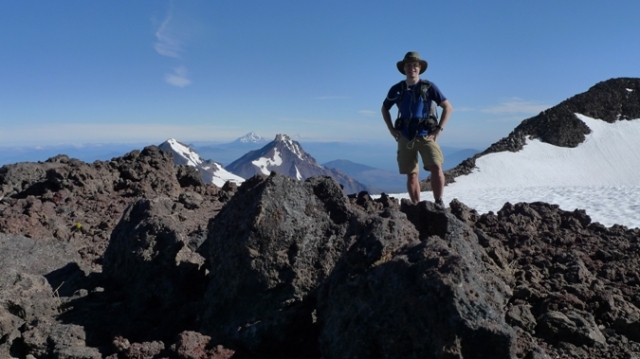 Teardrop Pool with Grunt and Chef traversing the crater

Pretty accurate read in both mileage and elevation

At this time, I realized that my lunch consisted of a probar with an expiration date of June 2009. It was perhaps a bit more gamey than normal. Mr. Picky had two peanut butter sandwiches for lunch and Grunt/Chef had a combination of bars/GU. I phoned Flight to confirm that everyone had made it and sent a few photos via email as there was cellular access (even AT&T) within a three-foot radius at the summit.

Grunt, Chef, Mr. Picky and Ploss (left to right) at the true summit

We commenced our descent at ~10:15am, reaching our base camp at Moraine Lake just before 12:30pm. Mr. Picky was nowhere to be seen, so I packed up his sleeping bag, pad, and took down the tent. I waited with Grunt and Chef for Mr. Picky to arrive twenty or so minutes later. We got back on the trail around 1:20pm, reaching Devils Lake about an hour later.

The descent to Moraine Lake was obviously a quicker trip than the ascent by nearly an hour. We passed about 50 people making the climb with shoes ranging from Vibram Five Fingers to alpine boots; packs ranging from camelbaks to deluxe mountaineering outfits; and zealots without poles to those with ice axes. It was a curious bunch indeed.

This entry was posted in Mountaineering, South Sister. Bookmark the permalink.