Let’s face it: it can be tough getting a good night’s sleep in the backcountry. Despite the fact that I generally hike long days, averaging upwards of 20 miles with several thousand feet of vertical climb and descent, even the most comfortable UL sleep system will often fail to provide rest for the weary, particularly in my case when it comes to staying asleep. Such it is that while I’m something of a gram counter when it comes to keeping my kit as light as possible, lately I’ve been heading the other way with regards to my sleep system in an effort to bag more of those crucial ZZZs that can make a huge difference in both performance and mood especially when on the trail for six or seven nights. To that end, I recently purchased an item designed specifically to mitigate the biggest problem* I have when hitting the trail rack, and that item is the Monkey Pillow by HikeBikeDale.

The Monkey Pillow is actually a pillow case that attaches to your pad. Shown here without inflatable insert

The Monkey Pillow is in fact a pillow case with elastic straps for attachment to a sleeping pad, inside of which you supply an inflatable pillow (not included) or spare clothing. There are several sizes and colors from which to choose, which now includes a variety constructed from Momentum 50 fabric; the one I purchased, shown above, is the “Small Monkey Pillow for camping” in the white on white color that weighs precisely 1.60 ounces on my digital scale meeting the manufacturer’s stated weight spot-on. The printed fleece side upon which you will place your weary head directly is very soft, while retaining a sufficiently sheer texture such that the effect is more like a soft baby’s blanket (which I suspect may be the whimsically patterned material’s source) than a pile fleece jacket – something I’ve slept uncomfortably upon in the past.

The reverse side is a thin sheer nylon, with two elastic cords well sewn onto each of the short sides of the Monkey Pillow case, permitting attachment to your sleeping pad of choice: for this test mine was a NeoAir All Season (size Regular) pad suitable for the 23 degree snowy conditions in which I tested the Monkey Pillow last week, and the small sized Monkey Pillow attached to the relatively large NeoAir perfectly. Point of clarification: any pad will do, but pay attention to sizing if you’re using a closed cell pad to avoid bunching. In conjunction with an inflatable pad the Monkey Pillow is a champ.

Attaching the Monkey Pillow to the pad is incredibly easy, which is where my biggest problem* when sleeping outdoors is remedied: this bit of kit will keep your pillow in place overnight. All night. This has been a constant issue for me, particularly when using a quilt: with a mummy bag, such as I used on this overnight, I’ve previously been somewhat able to keep an inflatable pillow in place simply by bringing the pillow into the bag’s hood with me – but that loss of space can lead to discomfort. With the Monkey Pillow, you’re free to roll about – I’m a side-sleeper only – while the pillow remains in place. 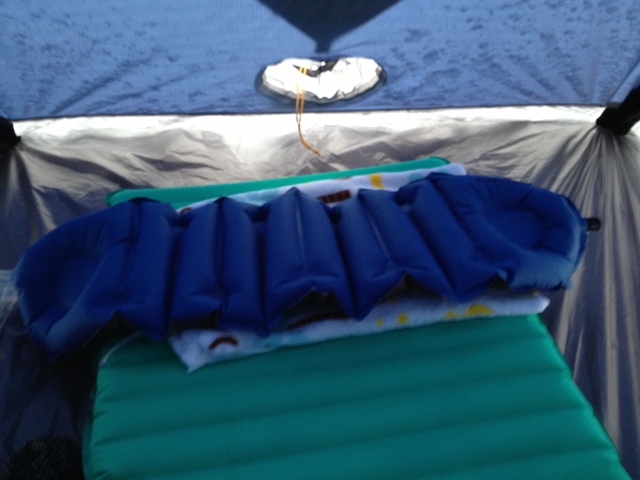 Again, the Monkey Pillow is actually a pillow case – you still need to provide your own actual pillow, and I have several inflatables from which to choose; you could certainly use spare clothing as well, but as I rarely bring spare clothing particularly in winter (wear em if you got em) I’m unlikely in any season to prefer that route vs. a dedicated, inflatable pillow. Over the years I’ve been moderately satisfied with the stock of BPL FlexAir dual chambered UL pillows (0.98 oz.) I acquired before the BPL store went bye-bye, which are essentially “disposable” hospital pillows, and have been fairly happy with the also now-defunct Kooka Bay pillow (2.2 oz.) I’ve used primarily for the past few years, but I’ve wanted something bigger that would still be light. Enter the Klymit Cush.

The inflatable Cush weighs in at 3.08 oz. and yet is significantly more versatile and substantial for the 0.8 oz. weight penalty than the Kooka Bay pillow or the highly similar Mont Bell U.L. Comfort System Pillow, inasmuch as the Cush design permits multiple configurations for either increased pillow volume under your head – such as we side sleepers enjoy – or for use as a simple camp cushion. In the past, I would have hesitated to employ something this big and oddly shaped simply due to the perceived impossibility of keeping the thing in place overnight. Enter too the Monkey Pillow. 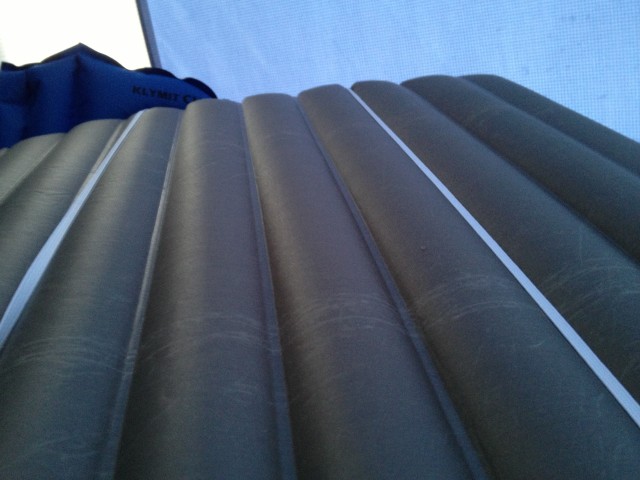 Again, as a disclaimer I was using an ALPS Mountaineering Navajo 20 degree mummy bag and as such did not have my head or face in direct contact with the Monkey Pillow, so I cannot yet speak to that comfort factor directly. I can report however that I had one of the best nights of sleep I’ve ever had that very cold night, returning happily to my previously reviewed Rab Summit Superlite Bivi mountaineering shelter, with the Monkey Pillow/Klymit Cush combination working sweet lullaby magic upon me, nearly uninterrupted all night and with nary a pillow issue whatsoever.

An additional note about this pairing as a side sleeper: if you’re like me, at home you likely sleep with an arm under your pillow not only because that down-side arm needs somewhere to go, but because your head requires a little more lift than your pillow alone to keep your head and neck at right angles or better to the bed. Basic bedroom physics! In the backcountry however you probably sleep with your arm tucked in, due to space constraints, cold temperatures, or the simple insecurity of having your arm hanging out from the side of your tarp on the ground. With this combination, and the Cush folded in half and secured inside the Monkey Pillow, I was able to sleep properly on my side with my head level, without my down-side arm and shoulder being contorted into an awkward position. All night long. I’m not sure if the Cush would have remained folded on its own, and I’m quite certain it would have found its way off the similarly slippery NeoAir All Season pad.

CONCLUSION: HIGHLY RECOMMENDED
The Monkey Pillow is an intuitive and clever solution to a very old problem I’ve had as long as I’ve been backpacking, and designer Wallace Hunter provides the answer for much needed rest with excellent craftsmanship, and a bit of whimsy. Indeed I appreciate that the Monkey Pillow doesn’t match the generic tones the balance of my gear employs, and I expect it will continue to make me chuckle right before I crash for a night outdoors. I’m particularly excited to use the combination of the two, including the Klymit Cush, in warmer weather w/a backpacking quilt, bivy and tarp, when securing a pillow within a mummy bag is impossible. While a bivy like my favorite, the MLD Superlight Bivy, implicitly helps corral you, your quilt, your pad and your pillow, the pillow never stays precisely in place – mine tend to get wedged between my pad and any gap at the bivy’s head, ensuring an instant drop out of sweet, sweet REM sleep.

I may review the Klymit Cush (and perhaps my old pal diphenhydramine) separately but suffice to say I recommend that uniquely designed inflatable sleep aid as well, when used in conjunction with the Monkey Pillow. True, I’ve increased the weight of my sleep system with this combination by nearly 3 ounces, but after returning from a winter weekend fully rested, I’m embarrassed to have even mentioned it.

Note: the Author acquired this equipment at his own expense and was not compensated prior to review by the manufacturer in any way.