Earlier, I section hiked the Wonderland Trail from White River to Longmire, and was remiss in blogging said experience. I correct that omission presently ’cause it was freaking $.

I joined Ploss and Franken in progress at precisely the appointed hour of 3pm along the main road that winds through the White River Campground. Several wanderings later, we procured our caches and staked claim to the best that car camping has to offer. That is to say, unless you really like “camping” with lots of other people (though nary an EEE-eye-EEEEE was heard) or you’re meeting some section hiking gimp whose wheels won’t permit circumnavigation of the entire WLT, rack at Sunrise Camp. I did however bring some brews.

Section 1: White River to Fryingpan Creek Trailhead
The next morning we broke camp early about 7:30am, broke my iPod even earlier, and headed out on the first leg of the day: a leisurely stroll down to the Fryingpan Creek trailhead. 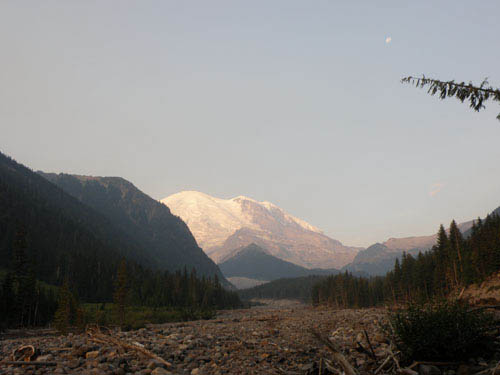 Think of this 3 mile stretch through the trees that skirts both the aforementioned Fryingpan Creek and the road to the White River Campground as a refreshing, light warm up – peaceful, gentle, plenty of good spots for 20, and just what the doctor ordered before Section 2. Section 2 is F.U. Look for the trailhead parking lot off in the distance to your left at about the 3 mile point, and kiss your leisurely stroll goodbye.

Next, it’s time to rise up to the challenge of your rival. This section, like the stairs, go up. Way up. You’ll gain about 2000 feet over the next 5 miles and as the dude from Survivor just reminded me, sometimes it’s OK to be the +1 mile behind straggler especially when Franken has been, shall we say, a little gassy.

This section kicked McLovin’s butt, but damn it was beautiful. The trail itself is comprised mostly of long switchbacks with occasional views of Fryingpan Creek waterfalls, glimpses of the mountain, and eventually some scattered alpine meadows. Get some water from one of the small creeks in this stretch as it’s in short supply in the high country. Keep an eye out for black bear scat 🙂 Your reward for this strenuous climb is Summerland, just short of the famous Panhandle Gap. Oh wait, Panhandle’s still a grim, rocky, snowfield-rich 2+ miles away.

Summerland camp includes a small shelter and a huge meadow that remained colorful and green in September. It’s a popular destination so if your itinerary calls for stops either here or further on at Indian Bar, be sure to get your itinerary in early. [Note: it’s worthwhile to double check your fax submission as we had some difficulty with our first itinerary not being processed – make a call if you haven’t received your confirmation by mail w/in a week].

Section 3: Summerland to Indian Bar
This was estimated to be an 18 mile day, meaning that the halfway point was just ahead near Panhandle Gap, at 6800′ the highest point on the Wonderland Trail. Getting there was rough. The trail here is exposed, very rocky and scattered with snow fields that make wayfinding difficult, especially if you’re not exactly Magellan (like McGelin). Eventually even I reached the panoramic summit, and it was spectacular.

The first part of this section was a serious loosener for me, and Franken was kind enough to stay with me while I dealt with quadriceps issues later determined to be the result of constriction from my spandex knee braces. Additionally, I bit it pretty hard as we all negotiated our way around a dangerous snow field covering a glacier-fed stream, and for a scary moment I feared I had twisted an ankle here, equally 9+ miles distant from anything close to “civilization” at the WLT summit. In short, be careful. Thanks again for staying with me Frank! Every-man-for-himself is a risky strategy up here.

Just beyond Panhandle Gap the terrain starts to descend back close to the treeline as you hike along the knife edge of the summit line. To your left are deep green valleys, where Franken and I thought we may have spotted mountain goats on a distant hillside meadow, and to your right is what amounts to an enormous, stark grey, violently carved natural quarry that continues to rumble while fed by glacial melt extending for several miles with Mt. Rainier in the background. 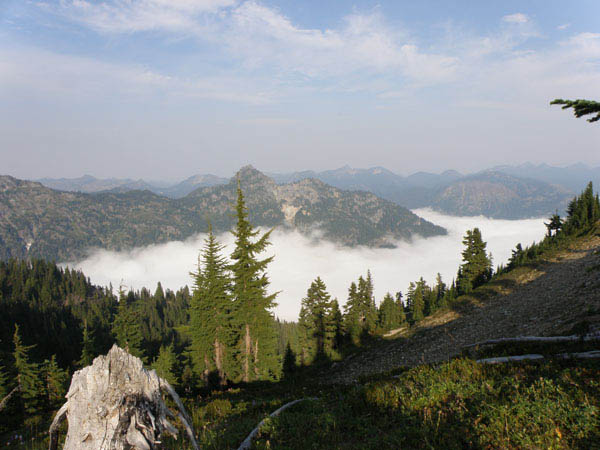 On the left hand side

It reminded me of the summit point on Mt. St. Helens’ Goat Mountain trail, where the blast zone and pristine forests meet. Franken discovered what would have been a challenging par 7 golf hole complete with a water hazard in the left hand valley that we would have photographed if only our photographer wasn’t like 2 miles ahead. [Note to self: next time bring your own camera and implements/other items]. 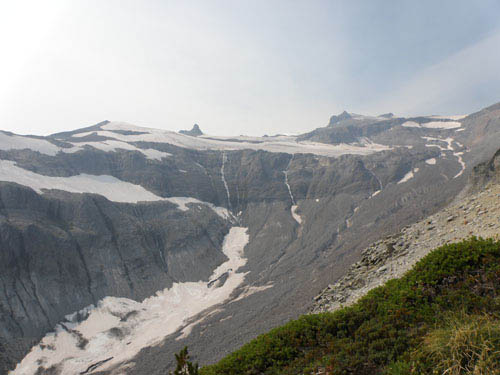 Mr. Slate would have enjoyed this enormous glacier-carved "quarry"

As we started our descent towards Indian Bar Franken and I saw a wolf running in a meadow perhaps a thousand feet below us on the left hand side, while elk bugled and marmots whistled distantly on all sides. This section concludes with a 2 mile descent back below the timberline through a dense forest, terminating when you hear the sound of water again as you emerge to discover the wide expanse of rocks, water and meadows that is the dramatic Indian Bar.

Indian Bar was killer. Prior to my arrival Ploss and Franken had a relatively close and otherwise uneventful encounter with a good sized black bear (though brown in color) that was by Ploss’ account his highlight of the whole WLT. I reached the shelter already a man: beat from the journey, but was resolute knowing that the remaining 6.5 miles to Nickel Creek was “downhill.” More on that later. Get some water here, be sure to check out the waterfall by the trail to the lower Indian Bar camps, and do some stretching b/c the “downhill” starts uphill. More uphill than you think. Or want 🙂

Section 4: Indian Bar to Nickel Creek
Yep, there’s a good 900 feet of elevation to go before you level off, and behind you are unbelievable views of Mt. Rainier and the Indian Bar valley. It’s also a great place for a shad, but you’ll need to pack a UL spent uranium-tipped pick axe in order to LNT, which I did, as far as you know. Take some time to look back on your way up; you’ll be back right about the timberline before you drop into a series of rolling, up and down alpine meadows that are real head scratchers as you try and figure out when, exactly, you’ll descend to Nickel Creek.

Eventually, after a few miles you’ll start to drop into the forest – really drop. On this stretch we separately encountered our first people in some time, some Euro whom I was pretty sure was Linux creator Linus Torvalds and his incommunicado spouse / companion / sherpa. In my conversation with him my spirits dropped: his sweaty exhausted estimate was that Nickel Creek was still 5+ miles away. D’oh! To say this section is steep is an understatement – this gave Ruckel Creek a run for its money, and my knees were hating it. He was also very concerned about the mosquitos at Indian Bar – I gave him the 411 on skeeters (none) but failed to mention the bear. Oops.

At this point my watch suggested we’d already come nearly 16 miles, and it was getting close to dusk. Time to step on it. This is where the descent becomes truly knee crushing, and just when you think you’re about to reach camp you’ll hit a few switchbacks and a demoralizing sign that reads “NICKEL CREEK CAMP .9 MI.” I double timed it to the spur leading off to Nickel Creek camp where I finally found Ploss and Franken on their way to get water – the camp is about .25 miles above Nickel Creek itself.

At this point, now just after 7pm, the sun had set and the accelerometer indicated that we’d come nearly 22 miles. Nickel Creek camp has a great group spot where we made camp, ate in the dark and slept under the giant “widowmaker” trees that surround this smallish campsite – the end of a grueling and immeasurably satisfying day on the Wonderland Trail.